Ah Reddit.. Creator of Internet Culture and Slayer of Marketer Souls.. Bearer of Traffic, Exposure, and Links.. How can I understand thee?!?

Reddit has long perplexed marketers and in many cases flat our scared companies to a point they won’t even touch the social platform, but more often than not, the reason for everyone’s wariness of Reddit is simply not understanding what makes the community tick.

That said, having been on Reddit for over a decade, let me share with you some of the core elements you need to understand, to have better success on Reddit.

Fair question and I think it is a great place to start. Let’s take a look at a graphic we made a few years ago, which has been updated with the most recent information Reddit has shared with us. 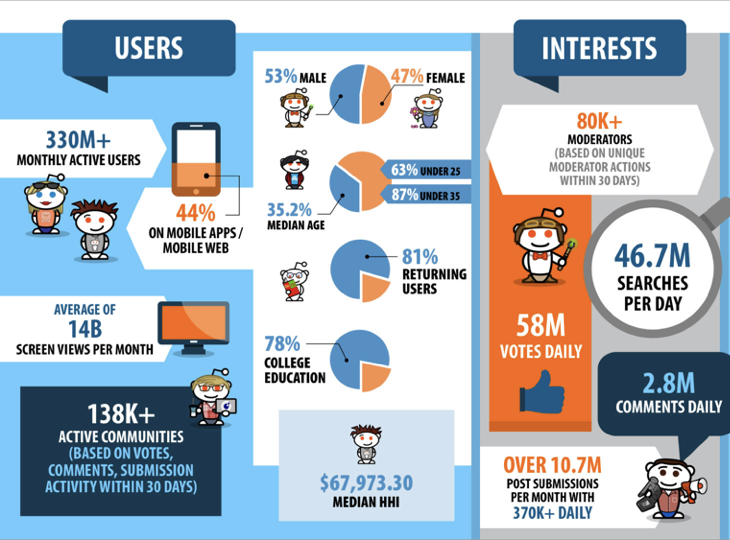 Note that with Reddit’s 330+ million monthly unique visits, about 82% of the audience is English speaking, with about 62% being from the United States, and about 8% from the United Kingdom.

This is also an audience that you do not have to distract from connecting with friends and family, but who are on Reddit to learn, engage, and debate.

Granted there is an overall Reddit community, but Reddit is a platform that allows anyone to create and manage their own Subreddit. This is an important distinction as it will impact how you engage and interact with the site and it’s many various users.

Then you have the ability to create and run your own Subreddit, with your own rules and many other powers bestowed to Moderators.

Subreddits Have Their Own Rules

Reddit as a platform has a number of basic rules (called Reddiquette), like hacking other accounts, uploading viruses, or breaking the law, but what really matters on Reddit is understanding and abiding by each Subreddit’s individual rules, which are sometimes extremely specific and unique. 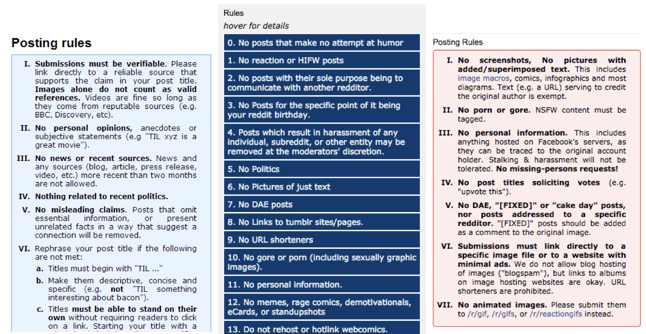 For instance, in one of my favorite subreddits, /r/Futurology, there is a rule that says “comments must be on topic, contribute to the discussion and be of sufficient length.” So if you were to post something like ‘great article’ as a comment, it would be considered against the rules.

Content submitted to /r/TodayILearned, must be at least 2 months old and the popular subreddit showcasing /r/CatsStandingUp requires that every submission have a title with only the word ‘Cat.’ and nothing more.

Although some of the rules seem odd, in order to participate and submit content to the subreddit, you have to follow the rules or risk being banned completely.

Also it is important to note that actual Reddit employees (Admins) will not typically get involved or override a subreddits right to make and enforce its own rules.

The Difference Between Admins and Moderators

Admins are Reddit employees and Moderators either created a subreddit or have been added to help run one. In some cases, Admins are also Moderators, but they keep their roles quite separated.

Moderators have power within any subreddit they moderate and Admins have power over everyone, but as I mentioned earlier, they try to let subreddit moderators manage their subreddits as they see fit and stay out of it for the most part.

The founders, the Admins, the Moderators, and the vast majority of the users, all remain anonymous on Reddit, using pseudonyms instead of their real names.

Unless you are making an Official Brand Account, where you specifically want everyone to know who you are, it is better to be anonymous and create a pseudonym.

This Algorithm is Logarithmic!

I am not sure the number of voting based algorithms also use Logarithmic logic, but Reddit’s definitely does. 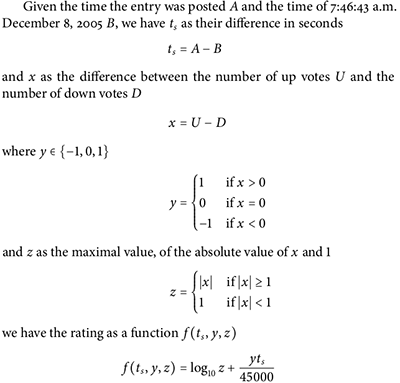 If you are not familiar with logarithms, let me explain in relation to Reddit’s algorithm like this:

So basically your first 10 votes are crucial, the next 100 are super important, and the next 1,000 are important.

That said, avoid the temptation to try to game those first 10 votes, as they tend to be pretty good at detecting gaming patterns and quick to ban people attempting to manipulate their algorithm.

On many social media sites, violating the rules (intentionally or not) in a way that gets you banned or suspended, will be accompanied by a notification or a message the next time you try to access your account.

That is not the case on Reddit, where if you are banned or if your submission is being held for Moderation, you have no obvious way to know it. This is the art of ‘silent banning’ or ‘ghost banning’ where you can log in, submit content, vote, and even comment, but no one other than you can see any of it.

Luckily, there is at least one solid way to determine if your account has been banned or if your recent submission has been put into a moderation queue. 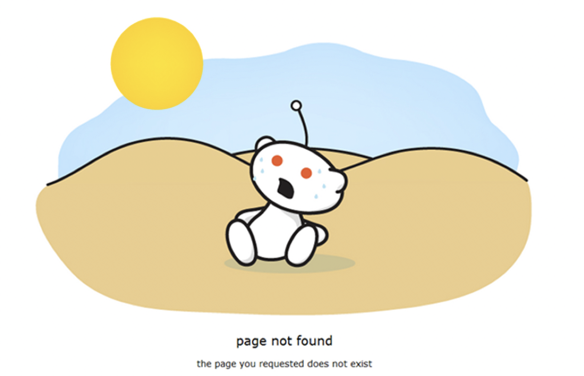 For a banned account check, simply visit your profile and copy your profile’s URL. Then log out and visit the URL again while logged out. If you see your account, then you are fine, but if you see a the below 404 page, then you have been silent banned.

For a potentially moderated submission, again log out of your account and then visit the /new/ section for the subreddit you just submitted to. If you see your new submission there, then it is not in moderation, but if it all of a sudden disappears, then it was moderated and you will have to reach out to the Moderators to ask them to release it.

One last thing that you don’t necessarily need to know, but is interesting and useful, is that you can make any section of the site you are on into an RSS feed.For instance, if you wanted to get all the content that reaches the #1 spot in the subreddit /r/Futurology, then you would simply grab the Futurology / Top URL and add ‘/.json’ and turn it into a working feed. https://www.reddit.com/r/Futurology/top/.json

Or let’s say you wanted to be notified whenever a submission included a keyphrase, like the mention of ‘ungagged’. https://www.reddit.com/search.json?q=ungagged.

Go beyond the basics, check out Brent’s UnGagged London Session (April 1-3): Leveraging Reddit: The Social Media Superpower Everyone is Scared Of

How to create an Anonymous LLC

Forming an anonymous company is something every serious business should consider. There is no benefit to putting your personal information online. Have you ever...
Read More

Go back to school with UnGagged Masterclasses

The summer is drawing to a close, and even as adults, we just can’t shake that back to school feeling. Why not lean into...
Read More

What makes an UnGagged speaker different?

These days, more and more professionals are getting their industry knowledge from the Digital Marketing conference circuit. From the latest in affiliate tactics or...
Read More
View All Resources
Get in the Know
Sign-up For Updates
Get notified about speaker announcements, early bird tickets and schedules.
Next Event!

Due to the COVID-19 pandemic, we have to postpone the NY dates for the safety...
Buy Tickets

The most forward-thinking digital marketers share their best-kept secrets in one place.
Buy Tickets

This website uses cookies to improve your experience. We'll assume you're ok with this, but you can opt-out if you wish. More information.